I've wanted to write this post since November 2011, but got caught up with the Christmas rush, and then a rush of projects...but New York city has yet to escape my mind.

I didn't expect my jaunt to the Big Apple would've left such an impressionable stamp on my mind - I thought of it just as a shopping weekend mixed with a little sightseeing. It had been some time since I last visited New York, somewhere in the 80's - albeit that too was quite memorable as Richard Gere was in the queue immediately infront of me waiting to be drilled by customs officers. He's just as handsome in person btw. I suppose the buxom beauty on his arm thought so too.

Anyhow, I digress. I set an itinerary for myself as always, to explore the city and managed to check off a few items from my lifetime To-Do list - have an early run in Central Park, and ride the city's infamous subway lines. I even had the opportunity to visit ground zero, eat at Mario Batali's Eataly, spent 30 minutes inside MOMA's gift shop, felt the rush of Times Square at midnight and had yet another celebrity encounter, this time it was Kimora Lee Simmons - we shared an elevator ride at the hotel. She's got mile high legs, probably doubling my entire height.

Truth be told, I did get a lot of shopping in. I was duly impressed with Uniqlo's gigantic flagship store on 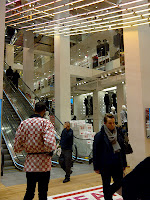 5th Avenue and their Jil Sander collaboration collection, +J, as I was of the sheer imagination and glamour of Bergdorf Goodman's general displays and their holiday windows - for the latter, I peeked one late night as they were being prepped for the Christmas unvieling. But here's a picture of one window in all of it's glory. 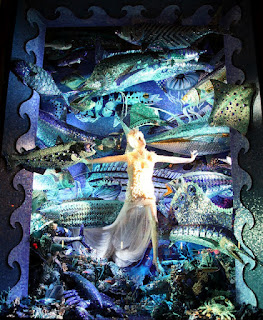 The charisma and energy of the city was truly inspiring. There's just so many interesting things to see, and the importance of design is prevelant everywhere you turn. I didn't get a chance to capture all I wanted on this trip, so I think I'll just have to visit again soon. I understand New York in the spring is supposed to be equally as fabulous....ok, maybe I'll make it back in the fall. Inbetween I've got more pictures to share with you on what inspired me and why I love NY too!
Posted by Michelle Lyn at 23:37 No comments: